A new federal labor report indicates that drug testing rates at U.S. workplaces have fallen considerably over the past quarter-century, as states began ending marijuana prohibition—and the data offers a glance what types of industries are screening workers for drugs the most and the least.

The U.S. Bureau of Labor Statistics (BLS) released the report last month. It also found that a small proportion of workplaces have eliminated or delayed screening of workers for drugs including alcohol during the COVID-19 pandemic.

The report is part of a project measuring businesses’ response to the pandemic. It appears to be the first time since 1996 that the workforce fact-finding agency has asked employers about drug screening.

During that time, nearly three-quarters of all U.S. states have since legalized medical marijuana, while more than a third have OK’d cannabis for adult use. The report shows that drug testing is generally less prevalent in states that have opted to legalize.

As might be expected, workers in safety sensitive industries like transportation and warehousing were most likely to be tested compared to other sectors like those in food services, arts and educational services. 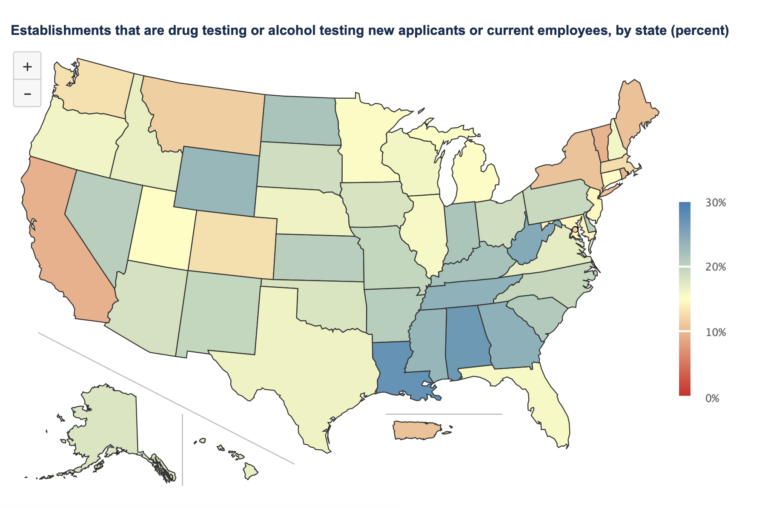 The survey went out to roughly 317,000 establishments across the country and received usable responses (with answers to at least 5 of 25 questions) from more than 80,000 workplaces across the country. Unlike most other BLS surveys, employers were asked to answer questions online and without the presence of an interviewer.

Michael Dalton, a BLS research economist who worked on the survey, told Marijuana Moment that he pushed to add the drug-screening questions to the employer after seeing media reports that some companies had stopped testing employees and job applicants in order to make it easier to fill open positions.

“There seemed to be a few stories, and these were, as far as I’ve read, entirely anecdotal,” Dalton said. “Part of where where it hit a brick wall was that we didn’t have recent data about drug testing.”

The findings nevertheless shed light on practices by private employers around the country, analyzed by size of the facility, industry sector and state.

The report defines establishments not as business entities but as individual physical locations, meaning that for the purposes of the survey, a business with one office in two different states would represent two separate establishments, each of which would need to return a questionnaire.

Dalton said he hopes future reports will allow analysis by total company size. “We also have estimates that are not publicly available just yet where we look at average wage paid within the establishment,” the researcher said.

(2) One interesting cut is just looking at the 10 states with fewest and most establishments drug testing. 8 out of 10 states with lowest rates have marijuana fully legalized – none of the states at the higher end fall into this category pic.twitter.com/epkAfy3bYa

Any causal relationship, of course, is unclear from the available data. It’s possible that more employers decided against screening workers as a result of legalization, but it’s also possible that underlying local attitudes—toward personal freedom, privacy or off-duty drug use, for instance—helped to drive both legalization and relatively lower testing rates.

Vast differences were also seen across industry sectors, in part due to ongoing federal cannabis prohibition. The transportation and warehousing sector and utilities sector both had testing rates far higher than the rest. Transportation and warehousing, which includes the federally regulated trucking industry and others, was the only category of businesses in which more than half of establishments said they screened for drugs.

Among the sectors with the lowest rates of testing were accommodation and food services; arts, entertainment and recreation; information; educational services and financial activities.

More employers in the utilities sector reduced drug testing during the pandemic than in any other sector, but that doesn’t mean they stopped screening entirely. The sector also had the highest proportion of establishments that both reduced or delayed testing and also tested new applicants or current employees

In terms of size, smaller facilities were far less likely to require screenings. Among establishments with fewer than 20 workers, 12.9 percent tested workers or employees. Of workplaces with between 20 and 100 people, 34.7 percent did. Those numbers continued to climb at sites with between 100 and 500 people and (56.7 percent) and those with more 500 people (69.9 percent).

Prior to 1996, Dalton said, the last BLS question about drug screening that he could find was from 1988.

Dalton said it was too early to tell whether any decreases in drug screening that occurred during the pandemic would persist afterward. He acknowledged that while many COVID-related workplace changes could fade, others aren’t likely to be reversed entirely.

When BLS asked about remote work during the pandemic, for example, “about 20 percent of all establishments said they increased telework and expect those increases to continue later,” Dalton said.

Previous article
Positive Drug Tests Among U.S. Workers Hit Two-Decade High
Next article
What to know about monkeypox and the latest cases

Humans continue to evolve with the emergence of new genes

Dementia: Patterns of weight gain or loss later in life may predict risk

People with cluster headaches more likely to have other illnesses, study finds

Age-related memory loss: Can we prevent or even reverse it?

What You Should Know About RSV in Babies

What We Know About Long COVID and How Long Symptoms Last

FDA Authorizes COVID-19 Boosters That Target Omicron: What to Know