Drug Driving – A crime on the rise

It took several decades for society to accept that drink driving is a significant problem and, even today, this careless and selfish act continues to kill or seriously injure innocent victims. Now, there is a new rapidly growing problem on our roads – drug driving.

Drug driving has been quietly growing, but only now is the scale of the issue becoming apparent, with two to three times more arrests compared to drink driving in some parts of the US.

In the same period, Cumbria Police recorded 883 drug driving arrests, twice the number than for drink driving. One in twenty fatalities on our roads nationally is caused by drug drivers.

However, the true scale of the problem is not visible due to the disparity between how drink driving and drug driving offences are recorded.

If someone fails a breath test and drugs test simultaneously, they will be prosecuted for drink driving, and the lesser drug driving offence will not be pursued or recorded.

Drug driving convictions can take up to 6 months, compared with the 2-3 weeks, sometimes less, that it takes to convict someone for drink driving. This is because laboratories that provide results for evidential blood tests, which are critical to convict a drug driver, are under-resourced and under-funded.

We also face another challenge: if an offender is caught drug driving, they can continue to drive until they appear in court – allowing those that flout the law to continue driving for long periods of time in some cases.

Tom’s Law, the idea for which arose as a result of the hit-and-run death of Tom McConnachie in Plymouth, is currently being debated in parliament. If it is implemented, police officers will have the power to issue a suspension notice from the moment an offender is caught drink, drug or dangerous driving, lasting until the matter is concluded in a court.

Despite all this, the speed at which drug driving is growing can be seen clearly. The below table shows the number of convictions for drug driving over a 10-year period. It’s worth mentioning that drink driving prosecutions during recent years have levelled off. This table demonstrates that this is not the case for drug driving: 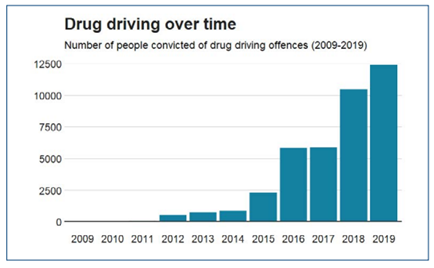 Last month, the rising threat of drug driving saw D.tec International partner with the charity Crimestoppers to launch an appeal targeting those who get behind the wheel and drug drive.

Previous article
To Lose Weight and Keep It Off, Study Finds Lifestyle Changes and Medications Can Be Crucial
Next article
Dementia and sleep: What do we know about this link?

Humans continue to evolve with the emergence of new genes

Dementia: Patterns of weight gain or loss later in life may predict risk

People with cluster headaches more likely to have other illnesses, study finds

Age-related memory loss: Can we prevent or even reverse it?

What You Should Know About RSV in Babies

What We Know About Long COVID and How Long Symptoms Last

FDA Authorizes COVID-19 Boosters That Target Omicron: What to Know